Late last year I planned a trip to travel across Southeast Asia with my younger sister Asma, who was already in Singapore for study abroad. Originally I had just planned to go to Singapore to visit her and check out her university, but after she told me how cheap it was to fly to different countries, once you’re there, I was hooked. I’m going to breakdown my trip into three separate posts or travel diaries: Bali, Bangkok, and the last but certainly not the least Chiang Mai.

If you haven’t already, click on the link to check out my Bali Travel Diaries!

There is a lot to see so let’s get started. I am not the best photographer, but I am learning. Apologies in advance!

We flew into Bangkok early afternoon and went straight to our hotel to check in;  we stayed at The Warehouse Bangkok . This hotel looked like it had recently been updated and decorated to appeal a younger generation. It definitely had a western vibe with all the IKEA furniture and decor. Normally we would try and get something a bit more cultural, because who wants to feel like they’re back home in the states if they’re traveling to such beautiful countries around the world. But, since we were only here for one night we chose the most affordable option that was close to what we wanted to do. The coolest thing about this hotel was that the lobby was outdoors, which I had never seen before! Also, the receptionist working the night shift was so sweet for personally going to get us dinner late night since the hotel restaurant and everything around us was closed. Now that is what you call customer service! 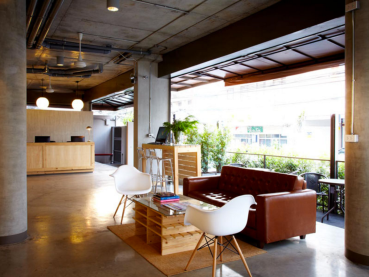 Here are some pictures I got from the hotel site.

Since we were flying into Bangkok one day and out the next we hadn’t planned too much because I knew that would stress me out. On our Southeast Asia itinerary we planned to visit Khao San road, the Grand Palace, Wat Pho, and a rooftop bar to check out some views.  Even then we didn’t make it to the rooftop bar, which at the time I was fine with because I was completely drained.

Just getting to the Grand Palace before it closed was an adventure in and of itself! The Palace is open till 3:30pm M-F; we got to Bangkok on Friday so we HAD to visit the Palace that day or else we would miss it completely. The Palace wasn’t far from the hotel, but we decided to take a taxi ,because it was near closing time and there was no way we were going to miss that.  But, life just wouldn’t be interesting enough if everything went smoothly, right? There was so much traffic that we paid our dues and jumped out of the taxi and started sprinting all the way to the Palace! As we were running to get to the gate (which we had no idea where it was) all the people we were passing were giving us directions and yelling hurry up because they knew it was about to close. If it wasn’t for the kind people of Bangkok we wouldn’t have been able to make it to the ticket counter.

There is absolutely no way I can show you exactly how beautifully this Palace has been designed and with what detail, but lets try and get you a good idea! 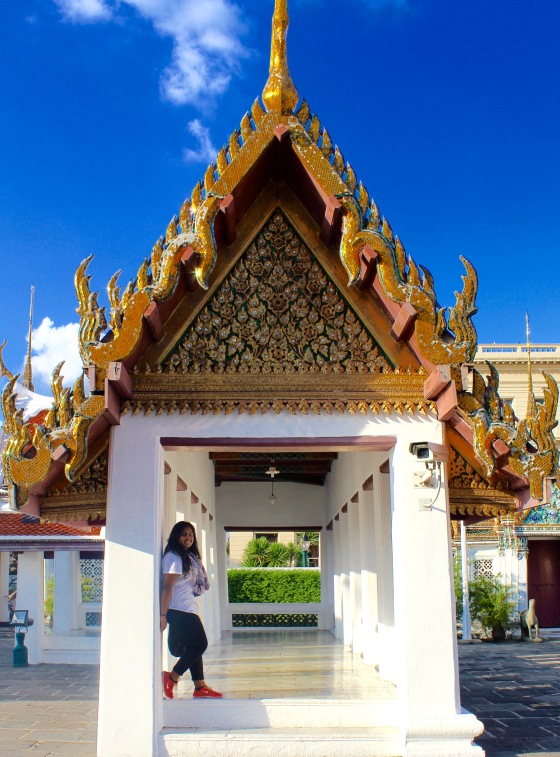 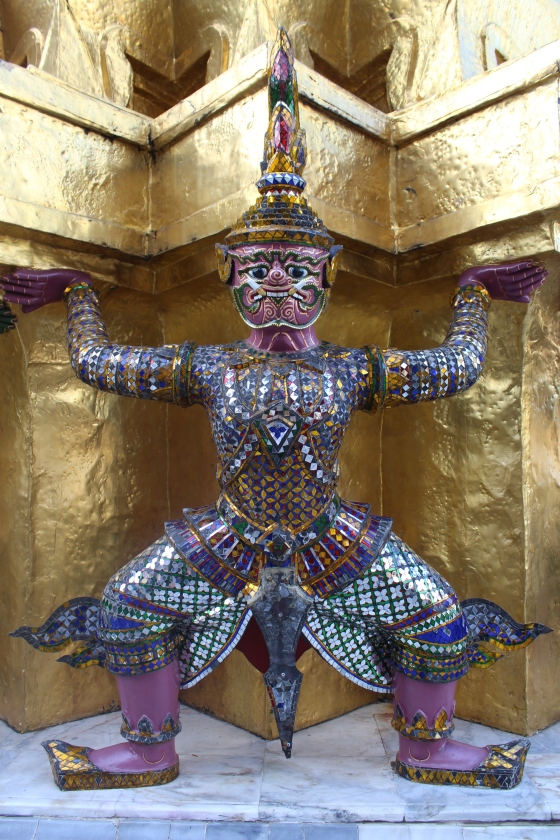 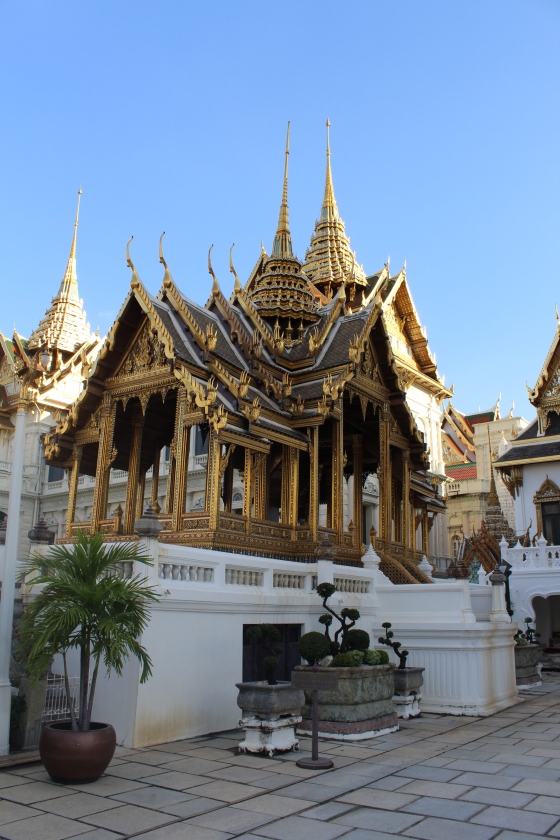 Wat Pho, also known as the temple of the reclining Buddha is a ten minute walk just south of the grand palace! When possible, I would suggest walking to all of your destinations; this will give you a better sense of the culture, instead of just driving from one tourist destination to the next. The temple is spread out with a countless number of buddhas lining up against each wall, but the reclining Buddha is confined in a small rectangular room leaving just enough space to walk around the statue.  The entire structure is covered with gold leafing giving it the most beautiful glow. 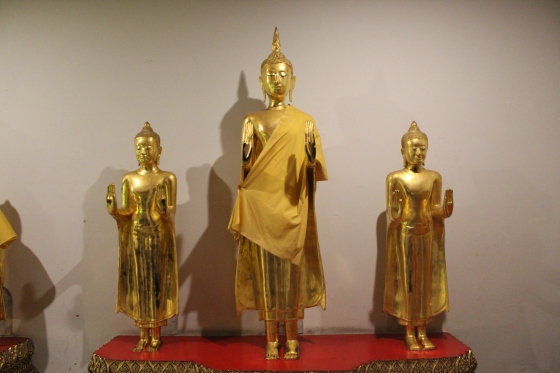 This is when things get a little sketchy… Khao San road is an area with shopping, restaurants, salons, and nightclubs. I didn’t really enjoy this area or the nightlife in Bangkok. To give you an idea, it was like a huge frat party merged with a rave, which some people might enjoy, but it wasn’t for me. So my sister and I did a little shopping and got a mani-pedi because they were soooooooo cheap. Unfortunately, I wasn’t able to get any pictures, just because I was so overwhelmed.

Overall, I enjoyed my day in Bangkok and felt that one day was sufficient to experience what the city has to offer. The Grand Palace and Wat Pho were definitely sights to see, and I couldn’t wait to see what other gems the rest of my Southeast Asian adventure had in store!

I hope you all enjoyed this glimpse into Bangkok!

If you are planning to go to Bangkok or have any questions about my trip please leave a comment below! 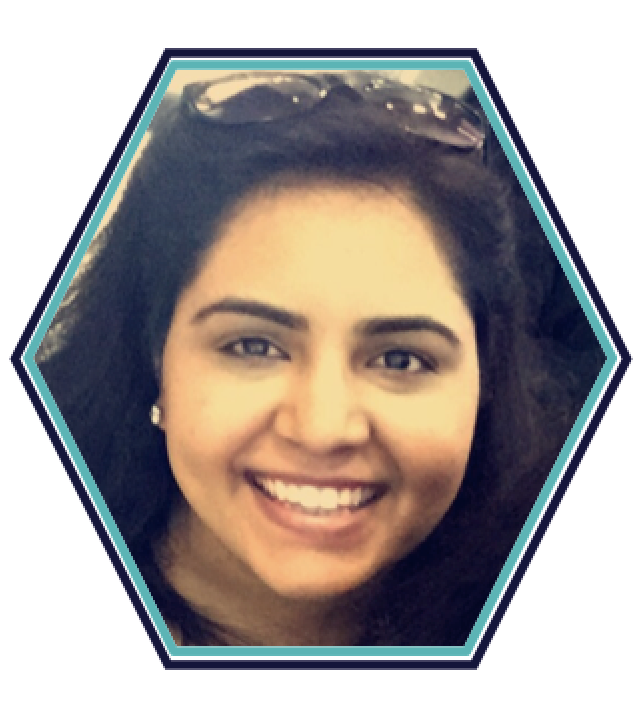